In 1973 I visited Sedona, Arizona for the first time. Sedona’s vortex reputation was not common knowledge yet  and it was a sleepy little high desert town. (Sedona’s reputation wasn’t publicized until  Dick Sutphen’s  book Past Lives Futures Loves in 1979.) State Route 89A was a rural two lane highway with very little traffic.

During my Sedona visit I took a hike in the ‘wilderness.’ It felt like a wilderness hike to someone from Chicago! I walked north from the King’s Ransom hotel  (currently Arabella Hotel Sedona – 2017 note) on Highway 179 to what used to be the ‘Y’ at 89A and then walked west up 89A to the area where New Frontiers (currently Whole Foods – 2017 note) is now located. At that time it was a strip mall with the Flicker Shack movie theater, an import shop, a food store and other shops. During my four mile round trip walk, only a handful of cars drove past me on the road.

While walking uphill on 89A I had a very unusual mystical experience. It’s hard to describe. I felt as if time and space had dissolved. What I experienced was so profound that I created a  drawing spontaneously afterwards while attempting to capture the essence of my vision. The drawing (at the top of this page) started out with what was to become the hair or brain.

In 2012 I met Benjamin Lonetree who is an electrical engineer who moved to Arizona in 2000. Originally Benjamin was somewhat skeptical of Sedona’s vortex reputation and decided to research the area to find out what was responsible for what he now calls the Sedona Effect. 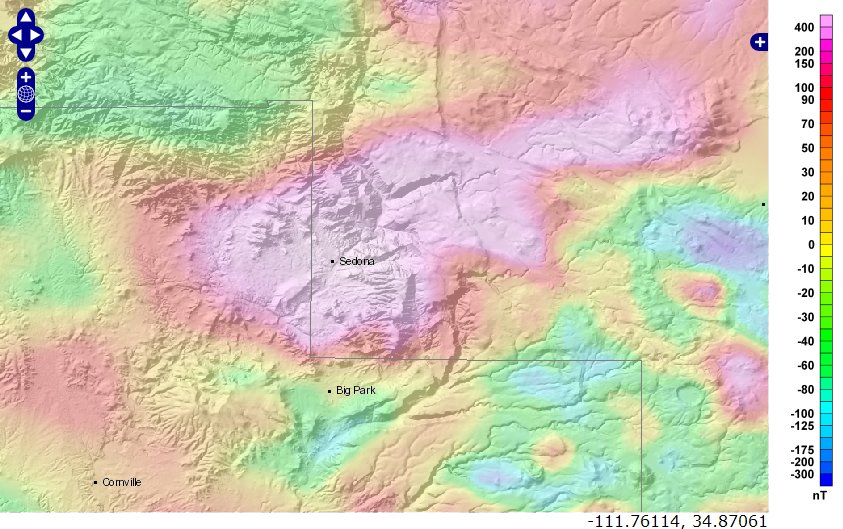 The two maps below show the approximate boundaries of the geomagnetic area.

I can see examples of what Benjamin calls “outflow and inflow of magnetic energy” illustrated in my drawing at the top of this page. I had always wondered what I had drawn, although on some level I knew.

Sedona is where Mother Earth speaks

“The bottom line in all of this: it shows how connected we are to the planet. How much a part of her that we are.

There’s a lot of speculation that the area up here in Sedona could be a large transmitter or a large receiver, that’s really a leap-of-faith on my point and I haven’t developed the equipment to see that’s a reality, but give me time and I’ll work on it!”

Connie’s note: It wouldn’t surprise me at all to discover that Sedona is both a transmitter and a receiver!

Benjamin mentioned to me that his friend, Dr. Michael Persinger, a neuroscientist and researcher into the unexplained, had created a God/Shiva/Koren Helmet – this helmet applies a magnetic field to the temporal lobes of the brain, similar in strength to the what Sedona produces naturally. Dr. Persinger found that people who took part in his experiments with the helmet experienced mystic experiences similar to my visionary experience when I first visited Sedona.

More info on the God Helmet

My Sedona drawing sat in a box for almost 40 years until 2012 when I dug it out and took a long look at it. Very interesting! Ironically, when I’ve glanced at this drawing over the years, I never did particularly like the way I represented the mountains in Sedona. Although now that I have placed a photo of Sedona above the drawing, I can see the resemblance between my drawing and the mountains very clearly. (Link to my other drawings)

I had an Ahah moment when I learned from Benjamin how Dr. Persinger’s helmet stimulated the temporal lobes with magnetic fields to produce a visionary experience. Check out the temporal lobe on my drawing above!

Postscript: In 1995, twenty-two years after my 1973 Sedona experience, I took a walk one evening while visiting Sedona for a few days. I walked west on 89A, starting my walk almost exactly where my 1973 mystical experience had ended (in front of what is now Whole Foods) and, all of sudden, it happened again! I felt as if I was continuing my 1973 walk through time, in 1995.

One of my friends jokingly wrote the following quote after he read the above information: “Are you implying that long-term exposure to ambient magnetic fields leads to New Age mystic chicanery?”

My answer: “That possibility definitely does exist!” (wink, wink)

In September of 2019 I heard a story of huge super-magnets being buried in the Sedona area some decades ago.

It is interesting to note that magnetics play such an important role in so much of the earth’s activity.

Nikola Tesla used rotating magnetic and electric fields for much of his revolutionary and ground-breaking research –  example: Philadelphia Experiment and time/space displacement.

High Strangeness at the Mysterious Bradshaw Ranch near Sedona