In 2012, stonemason and researcher Jim Vieira, star of History’s Search for the Lost Giants, spoke at a TedX lecture event in Shelbourne Falls, MA regarding enigmatic megalithic-looking stone structures in New England. Half of his talk discussed the historical and archaeological records of giant skeletons with anatomic anomalies (7 to 11 foot tall) recorded in Smithsonian ethnology reports, American Antiquarian and other science journals, and also New York  Times and other newspaper headlines from the late 1800’s to early 1900’s.

Vieira talked about his investigation of two giant skeletons which were on display in a museum in Deerfield, MA – one over 8 foot, according to the catalog of relics and inventory at the museum in 1883, but were reburied in recent years to comply with NAGPRA laws. Vieira holds nothing back, and bashes the Smithsonian and reveals the corruption and cover-ups they are involved in.

The talk was later controversially removed.

(Connie’s note) This is the forum page that perked my interest in finding the banned video above. (Click ok to the questions to enter the forum.) Notice how many times the various video links on this page were removed.

Shelbourne Falls TedX removed Jim Vieira’s video from youtube after it had been uploaded for over 2 weeks and went viral, getting 118,000 views, 1400 likes, and 100 dislikes and about 1,000 comments. Tedx claims Jim’s evidence is unverified, that all giants reported in newspapers and historical (even scientific Smithsonian documents) were all hoaxes or random cases of medical gigantism, and that any evidence he presented was basically pseudo-science. The list of reasons are pathetic.

I find it strange though, that they invited him to speak, video tape the lecture, upload it to the TEDx youtube channel, it get’s 118,000 views in 2 weeks and when they see it is going viral, they pull it.

Is the Smithsonian Suppressing the Physical Evidence of Giants?  – Richard J. Dewhurst

Interview with Richard Dewhurst, author of The Ancient Giants who Ruled America: The Missing Skeletons and the Great Smithsonian Cover-Up

Drawing on 400 years of newspaper articles and photos, first person accounts, state historical records, and illustrated field reports, Richard J. Dewhurst reveals not only that North America was once ruled by an advanced race of giants but also that the Smithsonian has been actively suppressing the physical evidence for nearly 150 years. He shows how thousands of giant skeletons have been unearthed at Mound Builder sites across the continent, only to disappear from the historical record. He examines other concealed giant discoveries, such as the giant mummies found in Spirit Cave, Nevada, wrapped in fine textiles and dating to 8000 BCE; the hundreds of red-haired bog mummies found at sinkhole “cenotes” on the west coast of Florida and dating to 7500 BCE; and the ruins of the giants’ cities with populations in excess of 100,000 in Arizona, Oklahoma, Alabama, and Louisiana.

Dewhurst shows how this suppression began shortly after the Civil War and transformed into an outright cover-up in 1879 when Major John Wesley Powell was appointed Smithsonian director, launching a strict pro-evolution, pro-Manifest Destiny agenda. He also reveals the 1920s’ discovery on Catalina Island of a megalithic burial complex with 6,000 years of continuous burials and over 4,000 skeletons, including a succession of kings and queens, some more than 9 feet tall – the evidence for which is hidden in the restricted-access evidence rooms at the Smithsonian.

Richard J. Dewhurst is the Emmy Award-winning writer of the HBO feature documentary Dear America: Letters Home from Vietnam. A graduate of NYU with degrees in journalism, film, and television, he has written and edited for the History Channel, the Arts & Entertainment Channel, PBS, Fox Television and Fox Films, ABC News, TNT, Paramount Pictures, and the Miami Herald. He lives in Vermont.

The Ancient Giants Who Ruled America 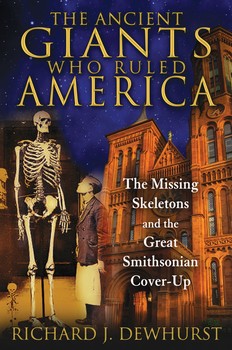 The Missing Skeletons and the Great Smithsonian Cover-Up by Richard J. Dewhurst

Explorer and archaeologist Jonathan Gray discussed discoveries that demonstrate advanced ancient technology. Because such artifacts don’t match current academic beliefs they are often suppressed, with evidence destroyed or hidden, he said, citing the Smithsonian Institution, and countries such as Peru, America, Israel, New Zealand, France, and Australia as being involved in covering-up evidence.

Some of the suppressed ancient discoveries he highlighted are still a mystery and simply cannot be explained. Archeologist Jonathan Gray described a variety of anomalous and ancient discoveries. These findings are evidence of a “super science and technology” that civilizations around the world once had but lost, he said. The ability to lift enormous weights through “sound waves” was documented in Egyptian records, as well as in Bolivia and India, and there was also a capacity to have lights that can burn for thousands of years, he detailed.

How Did The Smithsonian Institution Steal So Many Giant Skeletons From People & From Other Museums?