In 1973, I was given a copy of the book “Sri Aurobindo, or the Adventure of Consciousness” written in 1968 by Satprem, a student of Sri Aurobindo. This was the first book I had ever read on India’s spiritual philosophy.

Satprem describes in detail on how to acquire a silent mind. The creation of the silent mind is the very first ‘exercise’ of the beginner, and it is this practice that the masters always return to.

In my opinion, the ability to silence the ‘inner-chatter’ of the mind is a very valuable tool.

I created the drawing above after learning the Silent Mind exercise.

Here are a few of my favorite excerpts:

“One may ask, why silence the mind? But it is quite obvious that if we want to discover a new world within us, we must first leave the old – all depends on the resolve with which we take this step.

All kinds of discoveries are made, in truth, when the mental machinery stops, and the first is that if the power to think is a remarkable gift, the power not to think is even more so; let the seeker try it for just five minutes and he will see what stuff he is made of!

He will find that he lives in a clandestine turmoil, an exhausting whirlwind, but never exhausted, where there is room only for his thoughts, his feelings, his impulsions, his reactions – himself, always himself, enormous gnome who obtrudes everywhere, veils everything, hears only himself, sees only himself, knows only himself (if that) and whose perpetual themes, more or less alternating, can give him the illusion of novelty.

In a certain sense we are nothing but a complex mass of mental, nervous and physical habits held together by a few ruling ideas, desires and associations – an amalgam of many small self-repeating forces with a few major vibrations.

At the age of eighteen we seem to be set, our major vibrations established, and around them indefinitely will come to be coiled in thicker and thicker, more polished, more refined layers, the sediments of a sempiternal (unchanging) same things with a thousand faces which we call culture or “ourselves” – in fact, we are shut up in a construction (Connie’s note: a construction made of our thought forms) which may be of lead and without a skylight, or graceful like a minaret, but always shut up, buzzing, receptive, men in a skin of granite or in a statue of glass.

The first work of yoga is to breathe freely.

And naturally, to break this mental screen which allows only a single type of vibration to filter through and to know the multicolored infinitude of vibrations, that is, the world at last and all beings such as they really are and another “ourself” worth much more than we think.

When one sits down with eyes closed to silence the mind, one is at first submerged by a torrent of thoughts – they crop up from everywhere like frightened, nay, aggressive rats. There is but one way of stopping this commotion: to try and try again. patiently, persistently. And above all not to commit the mistake of struggling mentally with the mind; one must shift the centre.

We have all of us, above the mind or somewhere deeper, an aspiration, the very one which has put us on the way, a need of our being, like a password which has an efficacy for us alone; if one clings to it the work is more easy, for we pass from a negative to a positive attitude – the oftener we repeat our password, the more it will gather strength.

We may also take the help of an image like that of a vast ocean, without a ripple, on which one lies floating

… one floats along, one becomes that tranquil vastness; at the same time we get to know not only silence but a widening of consciousness. In fact, each one must find his way, and the less taut he is the quicker he will succeed.

One may start a process of one kind or another for the purpose which would normally mean a long labour and be seized, even at the outset, by a rapid intervention of manifestation of Silence with an effect out of all proportion to the means used at the beginning. One commences with a method, but the work is taken up by a Grace from above, from That to which one aspires or an irruption of the infinitudes of the Spirit. It was in this last way that I myself came by the mind’s absolute silence, unimaginable to me before I had its actual experience. 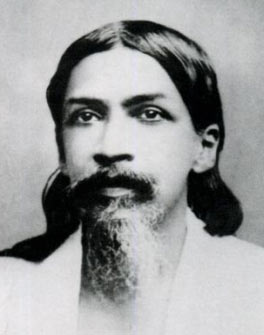 This is a very important point, for we are tempted to think that these yogic experiences are beautiful and quite interesting, but, after all, they are far beyond our ordinary humanity; how shall we, such as we are, be able ever to reach there? Our mistake is to judge by our present self the possibilities of another self. Now, precisely, yoga awakens automatically, by the simple fact that one has started on the way, a whole gamut of latent faculties and invisible forces which considerable surpass the possibilities of our surface being and which can do for us that of which we are normally incapable: One has to have the passage clear between the outer mind and something in the inner being … for they (the Yogic consciousness and its powers) are already there within you, and the best way of ‘clearing’ is to make the mind silent. We do not know who we are and still less what we are capable of.

But the practice of meditation is not the true solution of the problem (though it be quite necessary at the beginning to give the push) because we shall attain perhaps a relative silence, but the very moment we put our foot outside our room or our retreat, we shall fall back into the habitual clamor and this weill mean again the eternal separation of the within and the without, the inner life and life in the world. We need a complete life, we need to live the truth of our being, every day, at every moment, not only on holidays or in solitude, and for this, blissful arcadian meditations are not the solution.

The only solution then is to practice silencing the mind there where it is apparently most difficult, that is, in the street, in the tube, in work and everywhere.

Instead of going down the Boulevard Saint Michel four times a day like a harassed man who is ever in a hurry, one can go down consciously four times, like a seeker. Instead of living haphazardly, dispersed in a multitude of thoughts which not only are quite uninteresting but are exhausting like an obsessive tune, one gathers together the scattered threads of his consciousness and works – works on himself – at every moment; and life begins to acquire quite an unusual interest, because the least little circumstance becomes the occasion for a victory – we are orientated, we are going somewhere instead of going nowhere.

For yoga is not a way of doing, but a way of being.

To silence the mind is to leave the cup clean and empty for the divine liquor to be poured into it.

Faith, says Sri Aurobindo, is an intuition not only waiting for experience to justify it, but leading towards experience.