The story of how I found Harry Bunny Kitty

On June 1, 2016, my kitty mysteriously disappeared.

During the two months that Harry was missing, I and all of my friends felt that Harry was still alive. I had never cried about Harry’s disappearance because I could feel that he was still around – somewhere. My friends thought that he was being taken care of by someone in the neighborhood who wanted to keep him.

Two months later, at the very end of July,  I received a call from a woman who lived about an eighth of a mile from my home. She had seen my poster and thought she had seen Harry near her house. 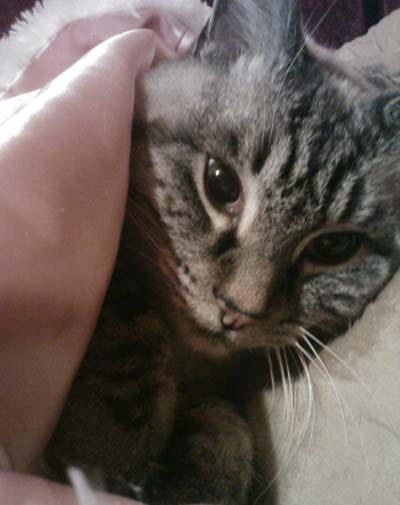 I visited with her and sat on her porch step during what was left of the day, but didn’t see my kitty. Later that evening I returned with a full kitty buffet and my guitar. I thought I’d sing softly and Harry would hear my voice and be attracted to my kitty buffet. I met every kitty in that part of the neighborhood. They were all enjoying the kitty feast and dinner music, but no Harry! I went home feeling a bit sad and frustrated, but still hopeful.

I woke up the next day to hear a voicemail message from a woman who lives next door to the first lady who had called me the day before. She and her Dad thought they had seen my kitty early that morning! So I decided to return to my spot between both ladies houses.

I was there keeping watch part of the day. No luck! I returned that night with another full kitty-deluxe buffet and my guitar. For a second night I sang soft dinner music while the neighborhood kitties feasted once again! I met many of the same kitties from the night before and a few new kitties too, but no Harry!  I went home (again) feeling twice as sad and more than a little frustrated. 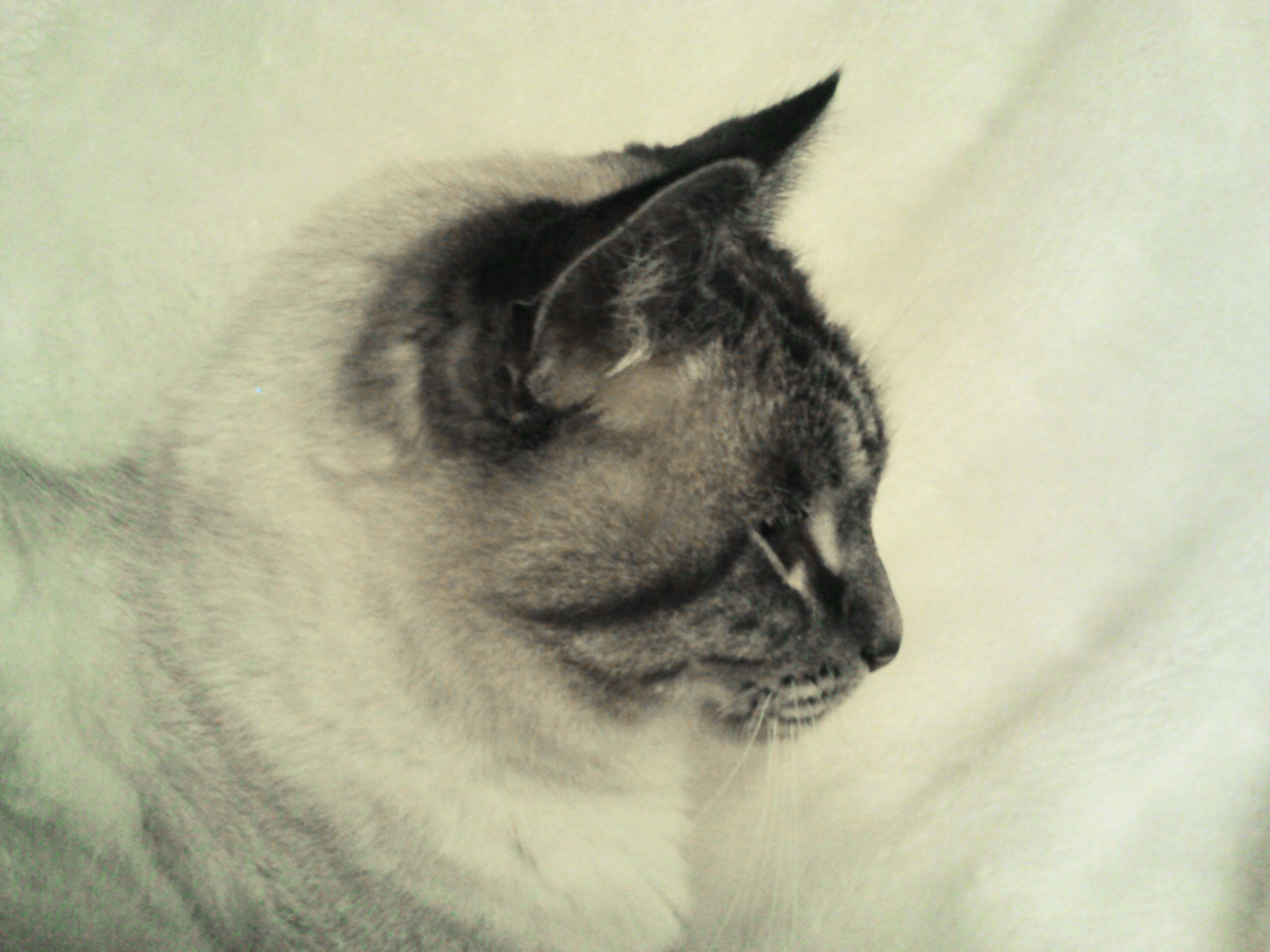 I woke up the next day to another message! This time it was a lady who lived across the street from the first two ladies. She’d seen my kitty early that morning! So once again, I patiently sat in my now usual spot next to the street during the day… but no Harry.

That night, I’m back there again, with another kitty buffet and my guitar, singing into the night. Strangely, during those three nights, I don’t remember seeing even one car driving by. All of the usual kitties showed up again for dinner, giving me looks like “Oh, playing again? Thanks for dinner!”

Then I noticed a kitty that looked a lot like Harry but this kitty wasn’t approaching the buffet, or me. I pulled out my flashlight and played hide-and-seek with this kitty, and after some heated minutes of chasing, I saw that this kitty could be Harry’s body-double, but that he was definitely NOT Harry! He had fooled all three ladies!

I arrived home around 4AM and was so frustrated with my unsuccessful three nights, (and this is the most important part of Harry’s story) I put my hands up in the air, palms up, and asked Out Loud for Divine Intervention – since I knew that I could not find Harry by myself. I went to sleep, knowing that I had done everything I could do, leaving the rest to divine intervention.

The next day, I woke up to an email from my Los Angeles friend. I had emailed him my lost kitty poster two months previously and he had forwarded my email to his neighbor Carla. He had just read a text from Carla saying that she had received an unexpected message from my kitty! 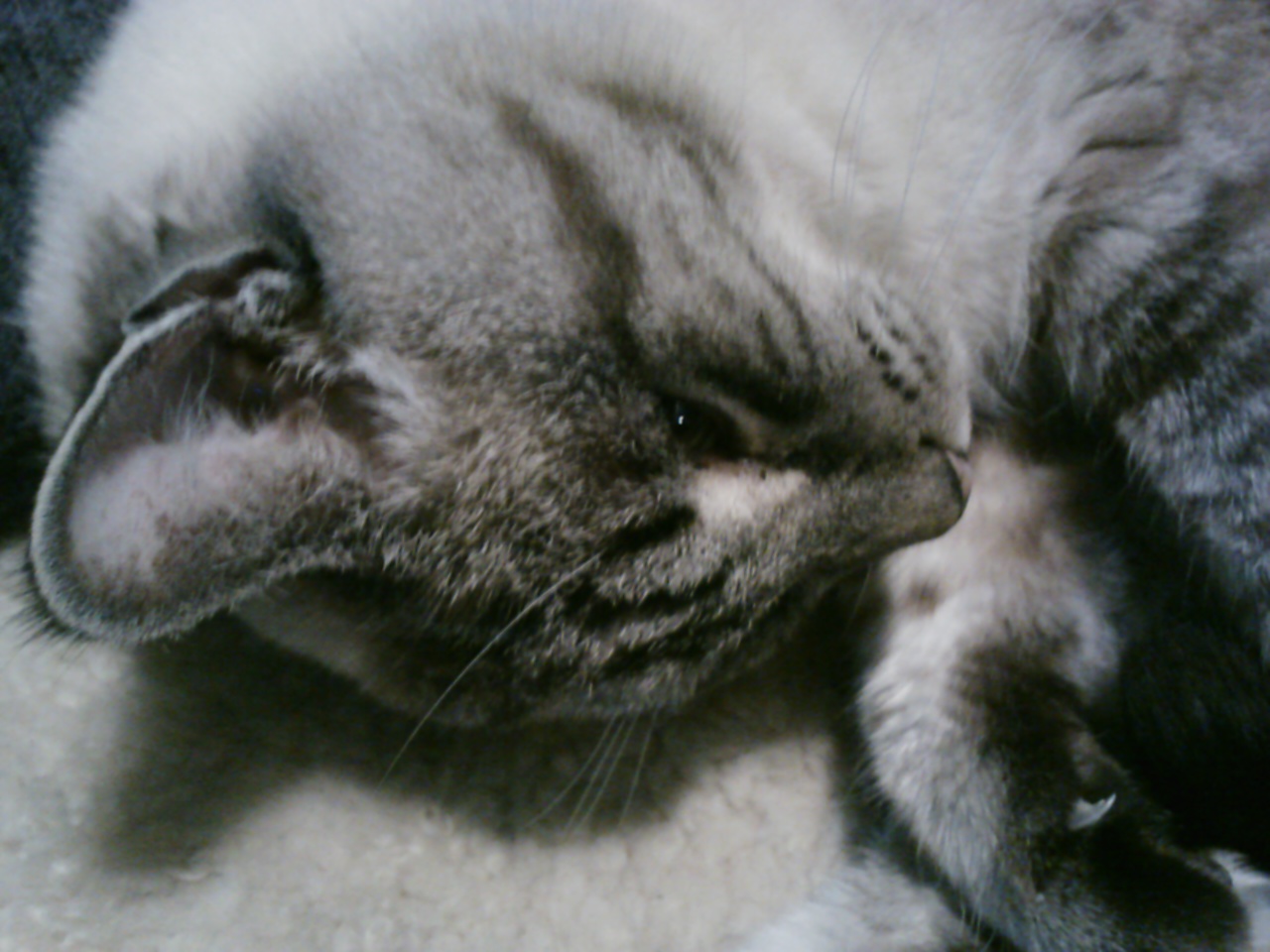 My friend gave me Carla’s phone number and I called her immediately!

Turns out that Carla is a psychic and one of her specialties is finding and communicating with lost pets. Carla told me that usually she is the one who initiates contact with pets, but this time Harry initiated the contact.

Carla remembered and knew exactly who Harry was when he appeared in her mind because of the lost kitty poster my friend in Los Angeles had forwarded to her two months previously. Harry looks like a brother to Carla’s two Lynx-point Siamese cats, which was why my friend sent the poster to her and why she remembered Harry.

Harry had ‘jumped’ into her mind at the end of a reading she was doing for someone (how polite of Harry) and said “Hi! I’m Harry! Tell Connie how to find me” and proceeded to give her detailed specific instructions on how and where to find him.

As I was talking to Carla on the phone, I pulled up Google maps. Harry said to look WEST. Suddenly I noticed a little dead-end street just west of my home. I had no idea that this street existed in the ten years I’ve lived here. I had always thought that there was a gully and a wash located there. The little dead-end street emptied into another little street that I never drove or walked by but a few times in my years living here.

The next day, I followed Harry’s directions exactly (Carla had said that the  timing was important) and I went door to door in the area that Harry had indicated. Harry said to go at dinner time because everyone would be home for dinner. Harry said to talk to everyone in that area. I talked to almost every person on both sides of that block and gave out flyers – each one with a color photo of Harry. The area was about an eighth of mile past the location of my kitty buffet and the three ladies.

The next day, a woman who I had spoken with the day before called and said that she could see a cat that she thought was Harry in the field next to her house. I raced over there and there Harry was, sitting on the hood of a big old pickup truck parked in a field. I jumped out of my car and the moment I called out “Harry!” he sprung off the hood into the air and ran towards me, calling out with his Siamese voice very loudly. We ran across the field  – just like that old TV commercial with two people running towards each other in slow motion over the grass. It was Harry! YES!!

And I did bring a container of food to feed him just in case he bolted (as I had heard that some cats do if they have been missing for a long time) but it turned out that he really wanted to come home and he was really hungry. (He’s a big cat, seems like he’s always ready for a dinner.) He gobbled up all the food and then let me pick him up. 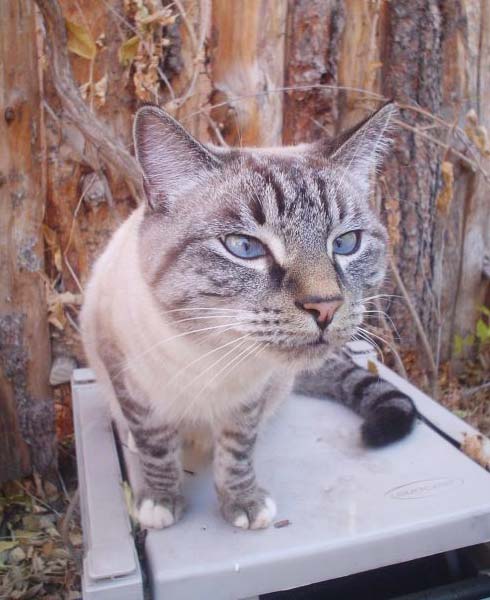 I walked him home, holding him in my arms (because I know how much he hates to ride in cars) and I could tell by his expressions that he had no idea where he was. The quarter mile to my house was lined with big barking dogs behind fences on either side of the street. Harry looked frantically to the right and left as I walked, as if we were walking down a hall of hell-hounds and immediately I knew why he was not able to come home. Harry was never a roamer and always stuck to his yard. I knew that he didn’t know his way around the neighborhood. And of course, Harry has a healthy fear of big barking dogs!

I speculate that he chased a feral tomcat off of his yard early in the morning when he disappeared. Feral cats have a much larger roaming territory than a house cat. In the heat of the moment, I could see big Harry joyfully chasing the feral and all of sudden finding himself in unknown territory once the excitement of the chase wore off. And the big barking dogs would keep him off of the road that led back home.

And perhaps one of the people I had talked to the day before had kept Harry inside their house for sometime, hoping to adopt him. Harry is a big and beautiful kitty!

On the day that I found Harry he was almost exactly as he was on the day he disappeared, besides being a little bit ‘slimmer’ (he would probably admit to being a little bit chubby before his summer adventure) and for a few ‘dreads’ on his back legs and some pesky bugs!!

Harry is now back to his beautifully groomed self although he did not enjoy the process!

Carla had mentioned that when Harry talked with her, he said that he thought that ‘he’d been on a summer vacation!’

And I did pray out loud for Divine Intervention! 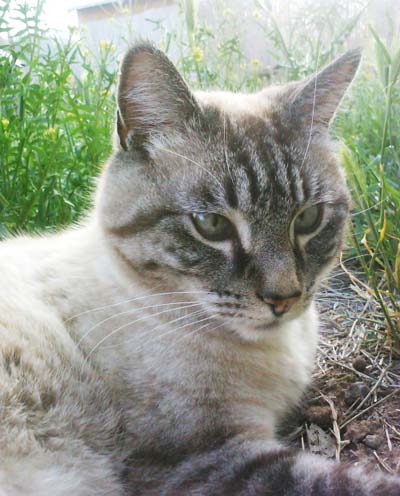 Even though I know that all things are connected, to actually experience this example of how Harry could tap into the neural network that connects all things, to send a message to me thru someone I didn’t know, who knows a friend of mine, is a confirmation of: WE and Everything are all connected!

And of course, the most important magical spiritual ingredient in Harry’s homecoming is Carla herself. Without Carla my story would have had a much different ending!

Miracles Do Happen. Believe it!

My friend lost his kitty just before the holidays (2018)  and Carla helped him to get his kitty home too.

What are those Kitties really doing?

The Path to our Inner Kitty

The Radiant Power of Pets