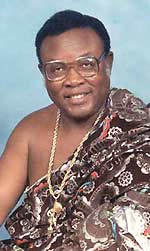 Cornelius Kweku Ganyo, a legendary Ghanaian master drummer dancer, died February 20, 2003 at the age of 65. Many people knew him as Uncle C.K. or Nana C.K., terms of endearment for a man who dedicated his life to preserving and teaching traditional dance and music primarily from the areas of Ghana, Togo, and Benin, West Africa.

Born August 26, 1937 in Adafienu, Ghana, Mr. Ganyo was the son of a judge and member of the Ewe tribe. He was endowed with the gifts of drumming and dancing and learned in depth the relationship between movement and drum language.

In 1957 when Ghana gained its independence, a strong nationalistic movement led young C.K. on a twenty-year research mission funded by the Ghanaian government to study traditional dance and music of various ethnic groups such as the Asanti, Dagbamba, and Ga.

Later he was appointed to direct the Arts Council National Dance Company and toured worldwide with that group from 1966-1983. He left Ghana in 1983 and permanently settled in the United States, recording with Baba Oluntunji and Charlie Parker. Kobla Ladzekpo, one of C.K.’s first teachers in Ghana, resettled in California and invited Uncle C.K. to the University of California at Los Angeles and CalArts Institute in Valencia to work as an artist/lecturer.

Kobla’s younger brother C.K. Ladzekpo came to the U.S. several years later to teach at the University of California, Berkeley. Together C.K. Ganyo, Kobla Ladzekpo, and C.K. Ladzekpo created the foundation from which West African music and dance education grew in the U.S.

In 1987, Mr. Ganyo came to Phoenix, Arizona, forming the dance and music performance group Adzido. Notably, Adzido, a Arizona Commission for the Arts sanctioned ethnic arts ensemble, inaugurated CCDR’s Humanities and Arts program with a concert at the Coconino Center for the Arts in 1991. Mr. Ganyo also was a faculty associate at Arizona State University’s Department of Dance from 1990- 2002, offering the first traditional West African dance and music courses at that institution.

Uncle C.K. Ganyo’s legacy lives on through the thousands of students he influenced worldwide. He is survived by his wife, Florence A. Ganyo of Tempe, Arizona, eight children, and eleven grandchildren. Mr. Ganyo was laid to rest with other family members in the Denu Cemetery, Ghana, on March 20, 2003.