In the golden era of the Pallava and Chola kings in India, during the 6th to 13th centuries AD, great temples with vast pillared halls and corridors were adorned with the sculptured gods of the Hindu pantheon and celestial dancers. In these magnificent shrines of the gods, holy ritual and dance were merged in beautiful temple ritual, a synthesis of art and spiritual practice. 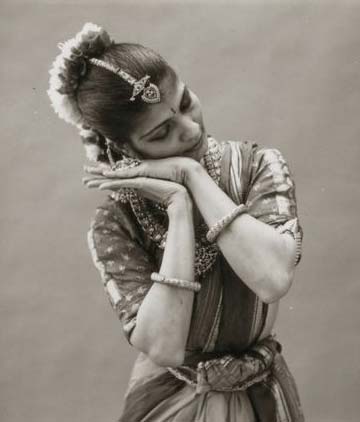 The South Indian Agama Sustras teachings contain the instructions for temple rites, festivals, and the creation of temple sculptures. In these ancient teachings are references to the performance of dance as a holy offering.

Bharata Natya was performed exclusively by women called Devadasis, “Votaries of the God.” The art was handed down as a living tradition from generation to generation in the Devadasi system. Women were dedicated to temples to serve as dancers and musicians in elaborate rituals.

These highly talented artists and their gurus were the sole repository of the art until the early 20th century when a renewal of interest in India’s cultural heritage prompted its re-emergence. The revival of Bharata Natya brought the dance out of the temple and onto the stage, though it has retained its essentially devotional character. Bharata Natya’s present form evolved in the 19th century by four brothers known as the Tanjore Quartet whose musical compositions for dance form the bulk of the Bharata Natya repertoire.

Bharata Natya is a dance for a soloist. Difficult techniques require many years of practice and brings every muscle in the body into use, including those of the face. The abhinaya, facial expressions of the emotions and feelings, are essential to the dance. Bharata Natya requires energy and grace, balance and suppleness, physical endurance and a faultless sense of rhythm. The movements are quick and precise, always symmetrical. The dance is comprised of jumps, spins, and balanced poses. 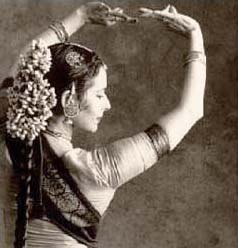 There are three sorts of dances. Nritta is a pure dance without interpretive meaning, based on beautiful attitudes and difficult rhythmic patterns.

Nritya is an expressive dance conveying a feeling based on a chosen theme, alternating between pure technical dance and abhinaya.

Note: Abhinaya – Sanskrit abhi- ‘towards’ + nii- ‘leading / guide’ – is the art of expression in Indian aesthetics. More accurately it means “leading an audience towards” the experience (bhava) of a sentiment (rasa).

Padam is a narrative dance, in which the dancer mimes, with the help of the symbolical gestures of the hands called mudras, along with expressions of the face and body, the most subtle nuances of the invocation song. 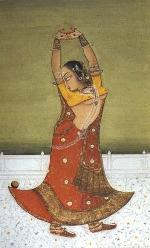 The ancient dance treatise Abhinaya Darpanam meaning The Mirror of the Gesture, says: “Where the hands move, the eyes follow; where the eyes go, the mind follows; where the mind goes, is the heart; and where the heart is, lies the reality of being.” This interior reality is not only awoken in the dancer, but also in the audience. Thus, this art, which blends with the sacred, brings us to our own true origin. – Text compiled from Dance Dialects of India by Ragini Devi and an article by Smt. Amala Devi.

Related article: The King & the Artist